﻿ ﻿ ﻿ Targeting dispositions for drug-involved offenders: a field trial of the Risk and Needs Triage (RANT)

Targeting dispositions for drug-involved offenders: a field trial of the Risk and Needs Triage (RANT).

Marlowe D.B., Festinger D.S., Dugosh K.L. et al.
Journal of Criminal Justice: 2011, 39, p. 253–260.
Unable to obtain a copy by clicking title? Try asking the author for a reprint by adapting this prepared e-mail or by writing to Dr Marlowe at dmarlowe@tresearch.org.

Drug-involved offenders have different needs related to their offending (in particular for addiction treatment) and pose different levels of risk for a return to crime after usual sentencing options. This US study confirmed that needs and risk are independent dimensions which can be measured and used to adjust sentencing to reduce recidivism.

Summary No single sentencing option is adequately suited to all drug-involved offenders. The most effective and cost-efficient outcomes are achieved when offenders are matched to appropriate dispositions based on their:
• criminogenic needs: disorders, deficits or impairments which if rectified substantially reduce the likelihood of recidivism; most common include substance dependence, psychiatric disorders and serious functional deficits such as brain injury or a lack of basic employment or daily living skills; and
• prognostic risk: characteristics of offenders associated with poorer outcomes in standard correctional programmes. Among drug offenders, the most reliable and robust include being younger, male, early onset of substance abuse or delinquency, prior felony convictions, unsuccessful attempts at treatment or rehabilitation, antisocial personality disorder, and antisocial peers. To succeed in treatment and cease substance abuse and crime such individuals must usually be closely supervised and held to account for their actions. Low-risk offenders, on the other hand, are apt to improve following arrest; intensive intervention may be costly yet offer little further benefit. 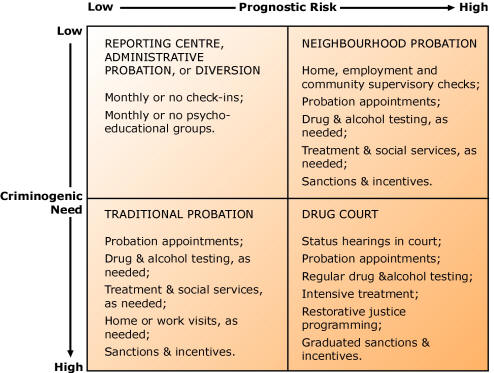 Each quadrant is associated (

figure) with what research suggests are appropriate sentencing options. The intention was to assign offenders to these options based on their RANT classifications. The intense supervision and treatment of the drug court was to be reserved for high risk and high need offenders. At the opposite poles, low risk and low need offenders would be subject to minimal reporting requirements or monthly check-ins and group psycho-educational sessions. In between are offenders who are high risk but low need, for whom intensive probation supervision was indicated, and those with high needs but a low risk of failing usual sentencing options, who were to be assigned to traditional probation. However, judge and defence lawyers (for pre-trial cases) and probation officers (for sentenced cases) could override these indicated dispositions, and slots were not always available in the intended programmes.

Of 3289 offenders potentially eligible for the study, 666 were identified as substance abusers and were available and agreed to be assessed using the RANT system, of whom one-year recidivism data was available for 459, about in 8 in 10 charged with drug offences.

A few RANT items which did not aid consistent classification were dropped. Analysis of the remainder confirmed that prognostic risk and criminogenic need are coherent and independent dimensions; offenders can be high on one and low on the other or at the same extreme on both. Probably because relatively serious offenders were most likely to be referred for further evaluation using RANT, 85% of offenders who had been referred to and joined the study were classified as at high risk of failing usual probation.

As expected, high risk and high need offenders were most likely to be re-arrested over the following year (44% were), while least likely (14%) were low risk and low need offenders. In between were high risk and low need (38%) and low risk and high need (29%) offenders. However, only the level of risk of failing usual probation was significantly associated with re-arrest rates; level of need was also associated with arrest, but this finding was not statistically significant. Comparable results were observed for re-conviction rates, which ranged from 31% to 10%. These associations were not significantly affected by the race or sex of the offenders.

Often due to the unavailability of these options, only a minority of offenders for whom intensive supervision (in the form of a drug court or neighbourhood probation) was indicated were actually assigned to these. Virtually all were instead given less intensive sentences. Offenders who were assigned their matched options were less likely to be re-arrested (35%) than those assigned to a less intensive alternative (41%), though this finding was not statistically significant. Clearest was the lower chance (41% v. 56%) of re-arrest when high risk/need property offenders were assigned as intended to the drug court rather than traditional or neighbourhood probation, a finding replicated in respect of convictions.

Results of this field trial lend initial support to the RANT as a triage tool for drug-involved defendants and probationers at or near the point of arrest. It appears to significantly predict re-arrest and re-conviction rates and does not reveal evidence of sex or racial bias in the prediction of recidivism. This study also suggests outcomes might improve if drug-involved offenders were matched to appropriate dispositions based on their risk and need profiles, though small numbers representing some combinations of risk, need and sentence meant that – despite substantial apparent impacts – statistical significance was not usually reached. Also, too few offenders were sentenced to 'over-intensive' options for the consequences to be assessed.

It should however be borne in mind that only about a fifth of potentially eligible offenders received a RANT assessment, so it cannot be assumed that the results would generalise to all drug and property offenders. In particular, offenders referred for assessment were overwhelmingly at high risk of failing probation. It can be expected that RANT would have greater predictive power in a more varied caseload. Finally, the possibility cannot be excluded that relatively incorrigible offenders were more likely both to refuse the indicated dispositions and to reoffend. If so, then poorer outcomes for those given 'under-intensive' sentences might not be due to this lack of intensity, but to the type of offenders who strive to avoid intensive supervision and treatment.

commentary This is one of the latest in an impressively coherent and persistent attempt to evidence how US courts (and drug courts in particular) can do more to reduce drug use and crime, including ways to conserve resources by reserving intensive intervention for offenders who need it. Within the ambit of drug courts, these studies have shown that triaging on the basis of initial risk and then adjusting in the light of experience, based on simple and clear criteria and feasible treatment and supervision enhancements, are both possible for US drug courts and effective in promoting abstinence from illegal drugs. The featured study extends this perspective by positioning drug courts themselves as an option best reserved for offenders with a need for addiction treatment and who are likely to fail usual probation due to their criminal tendencies, and possibly too those whose addiction has led them to commit property crimes.

This finding from one US county is partially confirmed by a major study funded by the US Department of Justice of 23 drug courts., which found their anti-crime impacts were greater for offenders with more serious prior drug use and criminal histories, but smaller for younger, male, black, or mentally ill offenders.

See this Findings analysis for more from the same research team on adjusting drug court regimens to the risk level and actual progress of offenders and an analysis of the relevance of such findings to the UK context.

REVIEW 2012 Assessing the effectiveness of drug courts on recidivism: a meta-analytic review of traditional and non-traditional drug courts

STUDY 2014 For whom does prison-based drug treatment work? Results from a randomized experiment