﻿ ﻿ ﻿ Prohibiting public drinking in urban public spaces: a review of the evidence 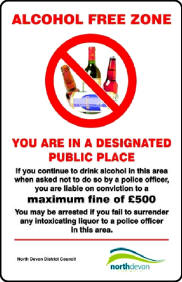