This entry is our analysis of a review or synthesis of research findings added to the Effectiveness Bank. The original review was not published by Findings; click Title to order a copy. Free reprints may be available from the authors – click prepared e-mail. The summary conveys the findings and views expressed in the review. Below is a commentary from Drug and Alcohol Findings.

Copy title and link SELECT AND COPY TEXT BELOW
A systematic review of the effectiveness of alcohol brief interventions for the UK military personnel moving back to civilian life
https://findings.org.uk/PHP/dl.php?file=Wigham_S_1.cab&s=dy&sf=sfnos
CLOSE | Comment/query | Tweet

A systematic review of the effectiveness of alcohol brief interventions for the UK military personnel moving back to civilian life.

Wigham S., Bauer A., Ferguson J. et al.
Journal of the Royal Army Medical Corps: 2017, 163, p. 242–250.
Unable to obtain a copy by clicking title? Try asking the author for a reprint by adapting this prepared e-mail or by writing to Dr Wigham at sarah.wigham@ncl.ac.uk. You could also try this alternative source.

For the UK armed forces, with their unique organisational, social and drinking cultures, what can be learned from US studies about reducing harm among military personnel adjusting to civilian life?

Summary Higher levels of alcohol consumption have been observed in the UK armed forces than the general population, which may increase the risk of veterans using alcohol as a coping strategy when adjusting to life events upon return to civilian life, such as changes in employment, accommodation, geographical location, finances, relationships, and family life.

People serving in the UK armed forces may be at greater risk of using alcohol as a coping strategy when moving back to civilian life.

There is some evidence that web-based brief alcohol interventions could have utility in the UK context.

However, studies testing the effectiveness of brief interventions for this population come from the US which has different military organisational, social and drinking cultures.

A systematic review was conducted to determine the effectiveness of screening and brief interventions for military personnel during this period of transition. Brief interventions are typically delivered to non-treatment seeking populations by practitioners other than addiction specialists. Evidence to date on the effectiveness of brief alcohol interventions comes primarily from studies about the general population in primary healthcare settings. However, results may be different for military personnel who have different pressures and demands.

Ten studies met criteria for inclusion, although all were from the United States. Most participants were male (over 80% in all studies), and the age varied from over 50 in half of the studies, to an average age of 32 in the other half. The review included both serving personnel and veterans.

Overall, there was some evidence for the effectiveness of web-based interventions over a number of sessions with personalised feedback about an individual’s drinking, and electronic reminders for clinicians to give advice to reduce drinking triggered by a positive alcohol screen:
• “Drinkers Check-Up” was a web-based intervention comprised of personalised feedback on the user’s drinking, motivation and goals, and information on tolerance. Two formats were evaluated with over 3000 active-duty personnel across eight bases. The formats modified for a military population were ‘high’ and ‘low risk’ versions based on AUDIT questionnaire thresholds, which were both associated with significant reductions on a number of drinking outcomes compared with a delayed-intervention control group. Effects were maintained six months after the intervention.
• “VetChange” was an eight-module cognitive-behavioural therapy web-based intervention comprised of personalised feedback on the user’s drinking, information on mental health and coping, and setting personal goals. It was evaluated for 600 military personnel reporting an average of two tours of duty and 20 months’ total deployment. Compared with the delayed-intervention control group, those receiving the intervention demonstrated significantly greater reductions in drinking, which were maintained at the three month follow-up. The improvements were found independent of which personal drinking goal was chosen, for example, abstinence or moderation.
• “Alcohol Savvy”, a multimedia web-based intervention, was not found to be effective.
• A 15-minute web-based assessment followed by personalised feedback on the user’s drinking was found no more effective than receiving information on recommended drinking limits and the effects of alcohol on health.
• Two studies (1 2) found that electronic clinical reminders prompting clinicians to advise risky drinkers followed by documented advice-giving did not improve resolution of harmful alcohol consumption compared with control groups. However, another study did find that when clinicians used electronic clinical reminders in response to a positive screen for harmful drinking their patients were significantly more likely to stop drinking at harmful levels (31% vs. 28% among harmful drinkers whose clinicians did not use the reminder)

While web-based interventions may have some utility in the UK context, generalisability of the findings from US studies cannot be assumed due to different military organisational, social and drinking cultures, different age restrictions on alcohol, and lower rates of alcohol consumption in the US armed forces than the UK.

commentary In 2017 the Ministry of Defence published figures on its initiative to deliver screening and brief interventions to all armed forces personnel attending a dental check-up. This represented the first large scale use of the three questions which constitute the AUDIT-C screening questionnaire in a military population. 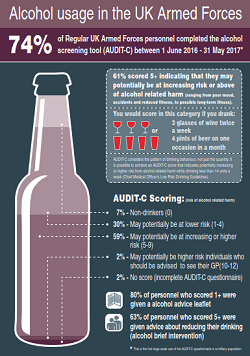 Summarised in a briefing paper and illustrated in an infographic (

image), 74% of serving personnel completed an assessment between 1 June 2016 and 31 May 2017, and of these 61% scored over five points on the AUDIT-C questionnaire indicating that they were at increasing risk or higher risk of alcohol-related harm. The recommended response to this was a patient information leaflet and delivery of a brief intervention, which 63% of those in the higher risk category received.

The US Veterans Affairs (‘VA’) health care service for ex-military personnel is the largest integrated healthcare system in the United States and mounted probably the world’s most successful effort to implement widespread alcohol screening and brief interventions. Nationally the service implemented annual alcohol screening in 2003, and from 1 October 2007 implemented a national performance measure incentivising brief intervention for patients who screened positive for risky drinking. In January 2008 the service made available an electronic reminder to prompt clinicians to offer brief alcohol counselling when patients screened positive with the AUDIT-C questionnaire. Yet, as documented in the Effectiveness Bank, across one VA region, patients recorded as having been given brief advice were no more likely than others later to have stopped drinking at risky levels. VA studies have yet to show that its major implementation effort has reduced drinking, results seen as a prime example of the disappointing impact of alcohol brief interventions in real-world conditions.

HOT TOPIC 2017 ‘My GP says I drink too much’: screening and brief intervention

REVIEW 2018 Interventions to reduce the negative effects of alcohol consumption in older adults: a systematic review

REVIEW 2012 Behavioral counseling after screening for alcohol misuse in primary care: a systematic review and meta-analysis for the U.S. Preventive Services Task Force